Stephanie Ringer is the Louisville Business Woman Featured in Money Magazine (May 2012 issue). Stephanie Ringer built her Aflac sales team into one of the largest in Kentucky. She was the very definition of success. Her staff loved the brainstorming sessions she held at the WorkShop meeting space.

Ringer loved the whiteboards, the comfy couches and crazy toys – hula hoops included. When the owners put WorkShop up for sale, Ringer decided to chuck the career she built, buy WorkShop and go into business for herself.

Is starting over smart at 46? Her friends and family worried it might be more than a little risky. But Ringer knew in her gut it was right. Turns out, it was so right that just 5 years later, Money Magazine chose Ringer as one of three “Boomerpreneurs” they featured in their May 2012 issue!

Young entrepreneurs like Facebooks’ Mark Zuckerberg may be all over the news, but guess what? Americans 55-64 have launched more businesses than any other age group these last ten years.

Whether you’ve ever considered striking out on your own, or not – even if you already own a business – you’ll love Stephanie’s energy and enthusiasm and you’ll learn the success secrets that made Money Magazine come calling.

No Holds Barred – Stephanie Tells it ALL

Stephanie will share her 7 MUST KNOW Keys to Business Success on July 17th at WorkShop, located at 1205 E. Washington Street in near downtown Louisville. You’ll see what Stephanie built and what caught the attention of Money Magazine.

Whether you’re an employee or a business owner, these keys will help you achieve excellence and make your life easier in the process. Stephanie calls herself “Chief Fun Officer” – bringing a whole new concept to CFO!

The event runs 6-7:30 pm and I’ll provide drinks and light eats as well as share some Smart Money Tips to round out the evening.

We’ll have a Q&A and Stephanie promised to stick around and answer your questions personally when the ‘formal’ presentation ends.

I promise, you don’t want to miss this one AND I promise you a fun, engaging evening – this is not a stuffy sit-through-it talk…and, how often do we have a ‘neighbor’ featured in Money Magazine? And one that is willing to share her best stuff?

I want to keep it intimate, so seats are limited and registration is required. You’re welcome to bring a friend, a colleague or spouse – just let us know.

RSVP to secure your seat. Email: Kevin.Anderson@clgsite.com or better yet, call Kevin Anderson directly at 502-265-5923.

Thanks for being part of my community. I love helping you achieve your financial goals and I’m thrilled to be bringing you this first “Smart Money – Smart Life” event. 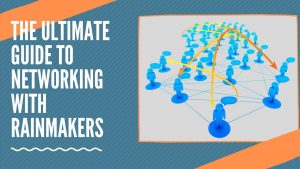 Our goal is to be a business development extension for an individual producer or sales team. We win when we get our members in front of new client opportunities, facilitate strategic relationship introductions and provide results-oriented business development training.